I Have Been Hibernating 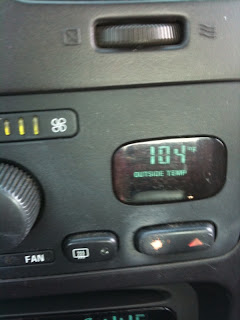 Maybe yawl have been wondering where I have been and what I have been doing.  Please note the picture above...temperature 104*.  And I'm pretty sure that it has been higher than that at times.  The older I get, the less I am able to tolerate the summer heat here in Mississippi.
So I just hibernate.  I got to work and church and that is about it.  I only go to Wal Mart when I have no more toilet paper.  I make David go to the grocery store.
The AC here in paradise runs constantly.  We keep in on 71* and it only stops running after dark.  During the day the house stays around 74* and that is with the thermostat set on 71*.  I am regretting all these French doors and windows and high ceilings.  They are indeed pretty, but when I pay the heating and cooling bills I sigh deeply.  I have placed sheets over the sheers in the master bedroom.  (I do not have curtains on any of the windows--there are sheers on every window and it too is indeed pretty for the view) Sigh.
David plowed/seeded/watered the front yard.  The grass only grew in the places it usually grows.  The water bill was $179.00 last month and $117.00 this month.  He quit watering when we got the first bill.  We still don't have decent grass. So it's as if he took $297.00 and flushed it down the toilet.  Sigh again.
He did make me two very nice flower beds.....one is doing well the other (which takes the brunt of the sun) not so much.  But I love them...they were my anniversary present.
Married 16 years June 16th.  Sigh again.  I adore my husband, he is my heart.
I have been on Adkins and have lost 26 pounds.  Sigh again.  But I'm stuck. The scales are not going to move anymore unless I do.  I have walked some at the gym in our church, but I have PROMISED myself that I will walk daily when it cools off.  Sigh again.
Adkins has been very hard on my body, and my liver studies elevated.  So my doctor told me to slow down and eat more carbs.  I have and have not gained, and I know I have got to come up with another plan.......Sigh again.
The furbabies are fine.  The Wild Monkeys   grandbabies are also fine.
I will leave you with these final pictures...let me set the scene.  David had been baby sitting 4 of the Wild Monkeys while I worked (yes I was scared).  I came home to them playing in the sprinkler.  He had to run an errand and left me in charge.
I said, "Don't get in the mud."
I said, "Don't throw mud balls at each other."
I said, "Don't make a mud hole in PapPaw's front yard."
Well, take a look for yourself. 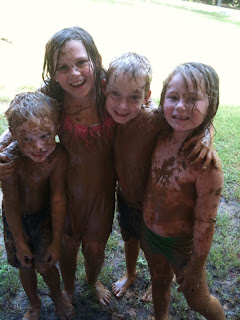