Yesterday as I was driving towards "The Delta" to do a little shopping, I turned on the radio.  I was struck by the fact that I couldn't remember the last time I had actually listened to the radio.  I prefer to drive in silence.  And I don't really remember when this started.
At some point I began to be really annoyed with the music that is currently being churned out these days.  I was raised around music.  My brother is a retired musician.  My uncle John L. (who is now 85)--if you put something in his hand he could play it(before arthritis took it away).
My Mama always said that if it had a string on it John L. could play it.  He is the real deal...the music is in him.  The music was in my Mama too.  She, Uncle John L. and my brother all "played by ear."  I started piano  lessons when I was in grammar school.  I still play, but I in no way have the ear that they do.
That said, I grew up around music of all kinds, and I love music of all kinds...some of course more than others.
But I said all that to  say this.  Am I the only one who doesn't get it?  Usher was on American Idol and I patiently listened to him. I listened with an open mind.  Then David (who is an awesome drummer by the way) and I just looked at each other in wonder.  What is all the hoopla about?
I don't get Akon.  I don't get Avril Lavigne. I don't get Christina Aguilera--who by the way has an awesome voice.
I don't get Brittany Spears. Lady GaGa makes me break out in hives.  I can't tell you one single song of Taylor Swift's. I checked out the top 10 songs of 09 and I didn't know a single one of them...well after all I did stop listening to the radio.
I think that Kelly Clarkson has an amazing voice...she had one of the top ten songs of 09--"My Life Would Suck Without You."  Are you kidding me?
I have also tried to listen to a little rap...but it makes me close to apoplexy.
I have always loved country music, I could go on and on about Johnny Cash, Emmylou Harris, Charlie Rich, Rodney Crowel, and Travis Tritt, who are just a few of my favorites...but I have lost track of almost all of the newer artists...I looked at the list of 2010's top songs--and I didn't know a single one.  The only new country artists that even begin to pique my interest is Lady Antebellum...I really like "I Need You Now."
Okay, I'm done with my little rant...I think I've figured it out...I'm living in the past...and Emmylou is singing... I would rock my soul in the bosom of Abraham
I would hold my life in his saving grace.
I would walk all the way from Boulder to Birmingham
If I thought I could see, I could see your face. 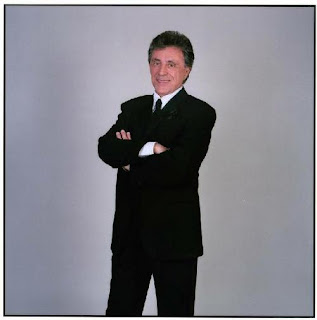 While We Were On Vacation,

I mostly read/ate/slept/and hung out.  The beach was pretty but there was a lot of sea weed in the water and on the beach, and since it was lonesome with out David, I hung out at the pool-which was very nice. 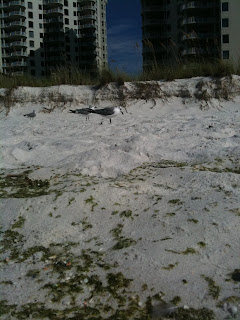 As the holiday weekend approached the beach cleaners were out early in the mornings and removed all of the seaweed. I shared the beach with these little sand pipers one morning.
When we were in Perdido, David fished and I would hang out under a tent.  He was always close by and I much prefer this, but with all the seaweed in the water, fishing from the beach was impossible. 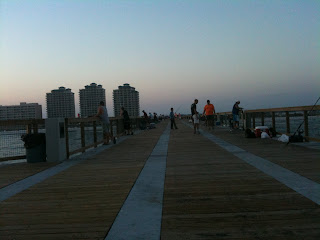 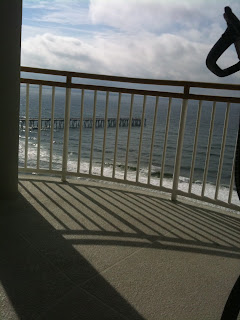 The pier is a quarter mile long.  I walked it only twice. Late in the afternoon.  No way would I be out there in the heat...I don't see how David stood it.  We could see the pier from our balcony and windows.  I could even see David with binoculars and I could see him on the pier web cam...technology... 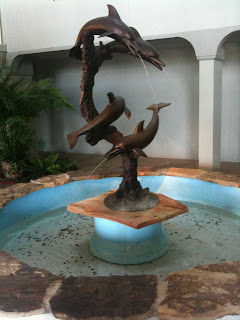 This sculpture is in the atrium on the ground floor, we were 15 stories up, I made the mistake of looking down at it from our floor...I didn't do that again.  I'm scared of heights, but I eventually got used to being up that high. 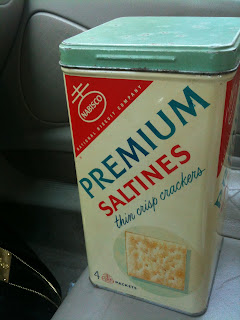 Bought this at an antique mall... 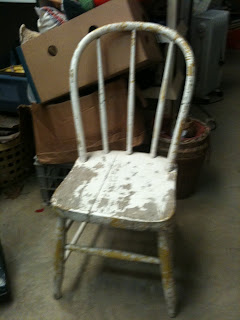 I'm a fool for a lonely, chippy and rickety chair.  But there would have been no way to get it home, we didn't have room in the car. 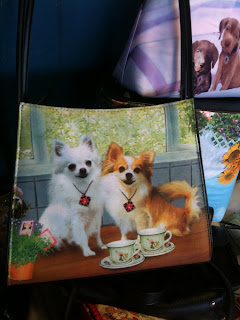 This purse was at the flea market, it seems that two little girls have been sneaking out of the house while their daddy and I are at work and doing a little free lance work...I'm going to talk to them about it. 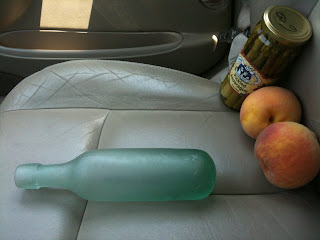 I bought this round bottom bottle because I love the color and it looks like sea glass. I can't really be sure that it is sea glass, but it is frosted inside and out.  From what I have read, these bottles were made in the late 1800s early 1900s.  I can just imagine this bottle being thrown overboard and washing up on the beach 100 years later, where it turned up in a flea market outside of Navarre...I bought it for $3.50. Oh and the peaches and pickled asparagus came from the flea market too.
There was a lot of stuff there..but it was soooo hot, I could not fully appreciate all of it. 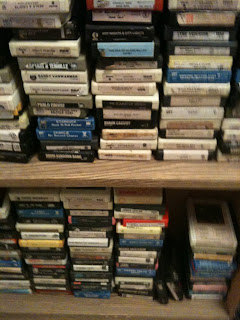 And for those of you, who like me came of age in the 70s I leave you with this picture of 8 track tapes.  Did any of you ever stick a piece of paper under the tape to keep it from dragging?
Posted by AngelMc at 8:27 PM 6 comments:

Wonder Where You Have Been?
Me:  I guess I need to let them know what we have been doing don't I?
CiCi and GinGin:  Yeah and be sure and show them pictures of some stuff.
I have been reading all of your blogs, and have been keeping up with all of you.  We have been on vacation and when we came home we have been playing catch up.
We went to the beautiful beach of Navarre Florida.  Our condo was beautiful and best of all for David, within walking distance of the fishing pier.  David literally fished from can to can't.  He was out there when they opened at 5AM, came in for a break around one or two and then would go back out again around six and stay until around nine.  And get this---he didn't catch anything. Nothing. Nada.  Even though nobody was catching anything, he was not in the least bit deterred or disappointed.  He enjoyed himself immensely. Apparently it is just as much about the anticipation and the act of fishing as it is about catching the fish.  Some people were catching Spanish Mackerel, Blue Mackerel, Lady Fish..and I saw pictures of Pompano.  I had my heart set on grilling fresh fish, but it didn't happen. 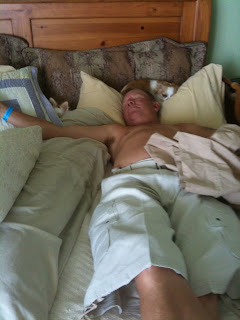 [CiCi and GinGin:  This is us with our Daddy.  He is just back from fishing, had taken a bath and is taking a nap while our Mommy gets dressed.  He took our Mommy out to eat. That fishing stuff must be really tiring.]
The things I did were: ( and not necessarily in this order) eat/drink, sleep, read and  hang out at the beach/pool.  Oh and I did some shopping at a few antique malls and I went to a flea market.  I'll post pictures later.
Posted by AngelMc at 7:26 PM 5 comments: