The other night I was laying in the bed thinking.  And I was thinking about if there is anything that I'm snobby about.
I came up with 2 things that I'm snobby about, my purse and my watch. Notice I didn't say purses or watches. I have one purse that I carry everywhere-dress or casual.  I have one watch that I wear everywhere--dress or casual. And they are as expensive as my Coca-Cola salary on champagne tastes will allow. (Which isn't Rolex or Louis Vuitton okay?)  And I'll blog about this later.
Which brings me to one thing that I am totally un-snobby about--shoes.
I am not like other women who have dozens of shoes, for all occasions all seasons.  No not me.  I own 4 pair.  One for work. Two for Sundays.  And one pair of sandals.  That's it. I do not own a pair of tennis shoes.  I hate them.
Now this does not include the "Cruel Shoes" of the title.  I don't consider them shoes.  They are torture devices.  They were designed by a misogynist.
By now you are wondering...so I will explain.
Here they are in all their cruel beauty.
Be sure to click on the video and watch them twirl.....I have the ones in silver.
I bought them to wear with a dress for Mardi Gras in Biloxi two years ago.  I tried them on for a hot minute and figured they would be fine.  That's the thing with cruel shoes, they trick you.  Their torture only begins to start after you have had them on for about 10 minutes and have walked about 100 feet in them.
Now I have to admit...I looked good. I went all out--big hair. dramatic makeup with false eyelashes, splashy jewelry--you would have had to kill me to tell me I wasn't fine. Here is a picture of David and me. Doesn't David look suave? Don't we look good? 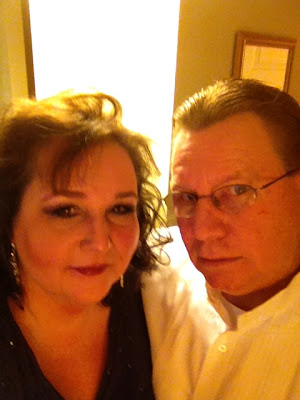 I don't have the shoes on in this picture--why do I know, because my nose is not bleeding!!!
Anyway, I knew something was up when I had to get David to help me put them on. My feet were already starting to swell a little because of all the layers I was wearing....and of course because of those layers I was unable to bend over.
The first layer was panty hose that had a little "support."
The second layer was a spanx.
The third layer was a long line girdle.  (I decided not to use the duck tape at the last minute--to cinch my waist)
And the fourth layer was my dress.
About now you are not wondering about the shoes, but what I did when I went to pee.
More about that later.
David helped me put the shoes devices on. I made it to the elevator and knew I was in trouble.  The devices began to pinch across the top of my foot, and the more I walked the more my instep hurt. I wobbled/hobbled to the lobby of the hotel made it to the door and knew there was no way I could make it to the truck.
David picked me up at the door and helped me into the truck.  (He's such a darling)
He drove up to the door of the event site and let me out so that I could get a head start.  The event was held at the Mississippi Gulf Coast Coliseum and Event Center. Which meant I had to walk the length of a foot ball field in the devices on a slick granite surface to get to the ballroom.
Okay.  I was prepared to die.  After all I have been through a lot in my life, I'm dressed to the nines, David is handsome in his tux and surely I'm not going to let two little torture devices keep me from partying the night away.  If I can just hobble to the ballroom, I can discretely shed the @^%^ things and my dress is long enough no one will know.
But what if I fall on this slick #$#%%@! granite tile?  David is not here to help me get up and I'll have to just lie here till he shows up, and I wouldn't blame him if he walks on by and acts like he doesn't even know me.   There I would be a big purple pile of chiffon.......with big hair and glittering jewels......
Halfway there my feet felt like they were in vice grips, the calf of my legs were aching and on fire and my thighs....oh my thighs--encased in layers of panty hose, spanx and girdle were crying.
I could not make it to the ballroom entrance, I indiscreetly but with the charm of a southern belle (always smile) I slipped them off and carried them in my hand through the ballroom door and to our table. I smiled charmingly at everyone I saw.
I threw them under the table and danced the night away in stocking feet. And I never put them on again....I walked to the truck in the parking in lot in the cool February night in stocking feet.
My feet, my calves and my thighs were happy that I did not put them back on.
I should have thrown them in the garbage can.....but I didn't......because I tried to wear them the next year!!!!!!!!!!!!!!
I know I know, I lost my mind.  I thought that the total of (maybe) 15 minutes that I had them on had broken them in.  Or that the year they had spent in my closet alone and forsaken had taught them a lesson.  Not.
The exact same thing happened the next year.
And I still haven't thrown them away.
They sit in my closet.....waiting......maybe.........next.........year........
Oh and I'll tell you how I went to the bathroom in a later post.